Think of ghosts in film, and people will usually think of horror movies, usually representing fear of the unknown, specifically what happens after death.  But it ain’t necessarily so: ghosts in film can also provide reassurance, nostalgia, mourning and even laughs.  Take a look at this eclectic mix of benign spooks and consider your all-time favourite:

And the nominees are…

Essentially a re-make of the Spencer Tracy B&W classic A Guy Named Joe (1943), this sees Richard Dreyfuss’ fire-fighting pilot returns from the afterlife to come to terms with his own passing, and ultimately encourage the burgeoning romance between the girl he left behind and a younger pilot.  It’s a lesser (and lesser-known) Steven Spielberg effort, and is arguably the most sentimental film to date from a film maker whose natural instinct is always to lean into the corny, but it wins you over thanks to Spielberg’s close control of the tone (striking the right balance of weepie and comedy), and winning performances all round.

This has become something of a minor classic, but on paper, the premise is such a strange one: farmer hears voices in his corn field, and flattens it to build a baseball diamond so the ghosts of great players from yesterday have somewhere to go.

Kevin Costner’s clean-cut, apple pie all-American-ness (you can clearly see the logic behind casting him as Robin Hood!) was never better-served than it was here, and James Earl Jones and Ray Liotta (1 year before his breakout turn in Goodfellas) go a long way to help create the strangely magical charm that this film manages to cast. 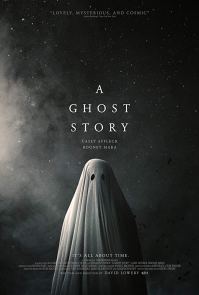 When I finally got round to seeing this modern tale of mourning from both sides of the life/death divide this week, it had such an effect on me that it provided the inspiration for this week’s award.  This risky (a ghost represented as a literal man under a white sheet), elegaic, strange, beautiful, haunting [of course] masterpiece is deliberately-paced and sad without ever being sentimental.  It’s a true original that achieves a truly unique atmosphere and will stay with you for days afterwards.  It’s on Netflix, so anyone with a subscription should do themselves a favour and add it to their Watchlist immediately.

Now, there are a few moment in Ghostbusters that are a little bit scary; a bit like the Indiana Jones films of the same era, a PG certificate film could get away with stronger, brief moments of horror than you can today.  But the overall tone and intention is definitely not to scare, but to entertain wildly.  That such a wilfully silly tale succeeds, and has become such a stone-wall classic, is testament to the perfect storm of chemistry (Murray, Ackroyd and Ramis are natural complements of one another) and concept.  Compare the failure of the all-female 2016 remake to catch this lightning in a second bottle to appreciate how brilliant the original is.

A real mix of styles this week, I’m sure you’ll agree, which might make it a difficult choice.  Think carefully, then cast your vote in the comments below or on Twitter.  Winner announced on Friday!

And the winner is…

It was a very tight one this week, with every nominee getting plenty of votes, so thanks to everyone who got involved.  Clearly, this is a category close to alot of people’s hearts!  However, we proudly announce that the Best non-scary Ghost Film in movie history is:

Evidently the special charm of this magical film endures, so if by any chance you’ve not seen it, I strongly encourage you to seek it out.

Thanks to all those who voted!  The next poll is coming very soon!!!