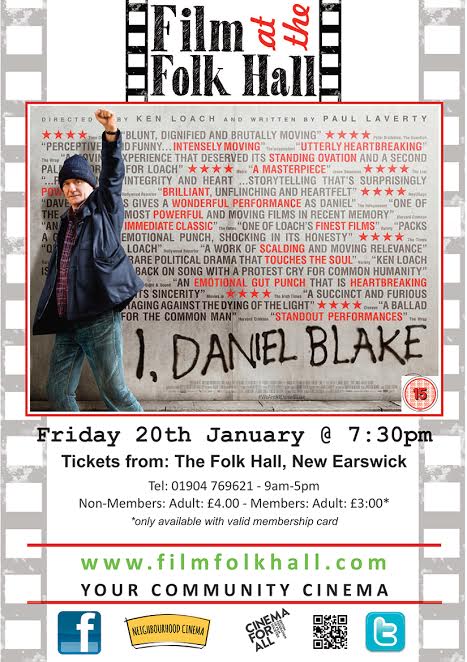 Tickets are on sale for the January 2017 (Friday 20th) showing of Ken Loach’s  I’ Daniel Blake, the Palme d’Or winning drama gaining rave reviews from critics and film goers alike.

“Blessed with exceptional lead performances from Dave Johns and Hayley Squires, Loach crafts a gut wrenching tragicomic drama (about a “monumental farce”) that blends the timeless humanity of the Dardenne brothers finest works with the contemporary urgency of Loach’s own 1966 masterpiece Cathy Come Home.”

I have been privileged to spend time with Ken Loach when he was directing “Which Side Are You On?” his film made during the great miners strike of 1984-85. (I was directing a film about the strike myself for Channel 4 in their “People To People” slot). He is a very humble and interesting guy who has never wavered from his belief in supporting the “underdogs” in our society. His lifetimes work has produced an amazing legacy of first class TV and cinema, arguably unsurpassed in this genre in the UK.

I have also been known to state (many times) that it was Cathy Come Home that inspired me to become a documentary film producer, director and editor. The power of that TV drama still resonates with me fifty years after first seeing it on our families little black and white TV in our council flat in Sheffield in 1966.

Try to get hold of tickets, if you can, for the Film at the Folk Hall show and see a master craftsman at work. It will be one of the best value £4 cinema tickets you will buy in 2017! Guaranteed.